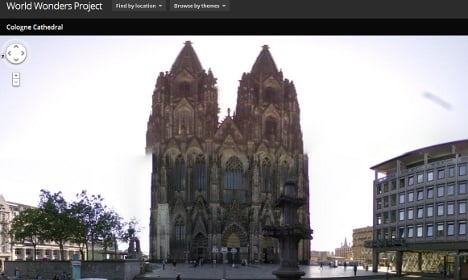 It took centuries to build the double spires, but only the click of a mouse cut them down to size – if only on screen.

The image of the Gothic masterpiece on Google’s latest feature, supposed to showcase the world’s greatest cultural achievements, turns the proud, twin skyward thrust of the cathedral into a sad heap.

The image of what seems to be a podgy village church was taken with the same “camera cars” that produced Google Street View – the virtual interactive map which allows users to explore the world’s roads via their computer.

Barbara Schock-Werner, a master builder who takes care of the cathedral building, was horrified when she saw the images.

“This can’t be true! That’s awful, completely horrendous!” she told the regional Express newspaper. “If you want to introduce people to the wonders of the world, then the pictures should bear some vague resemblance to the reality.”

Schock-Werner is now planning to write a strongly-worded letter to the management of the world’s biggest search engine to complain about the unfortunate truncation.

According to Google, because the cathedral is so tall and surrounded by such narrow streets, the cameras were not able to get far enough away to capture the entire building. Consequently, the picture had to be assembled out of several separate images.

So far, Google World Wonders covers 132 landmarks in 18 countries. “We will continually expand and develop the project … and keep publishing images of new wonders,” Stefan Keuchel of Google Germany told the paper.

“We hope that in the course of one of these updates we’ll be able to show the Cologne Cathedral in all its glory.”