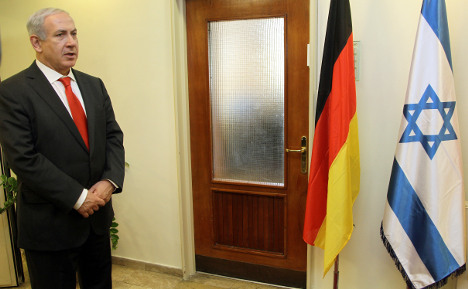 “Germany has underlined its commitment to Israel’s security with the sale of another submarine,” Netanyahu told the paper’s editor-in-chief and foreign correspondent at his private residence in Jerusalem.

Germany has already supplied Israel with three Dolphin-class submarines while another three are to be delivered by 2017.

The interview follows a report in Der Spiegel magazine on Monday that Israel was arming the vessels with nuclear-tipped cruise missiles without the knowledge of the German government.

Government spokesman Steffen Seibert said he would not “speculate” about Israel’s nuclear arsenal but indicated that Germany had not stipulated what Israel could do with its submarines once it took delivery. “I cannot confirm there are any such clauses,” he told Der Spiegel.

Former diplomats were more forthcoming, however, with ex-undersecretary Lothar Rühl telling the magazine that it was “assumed” that the submarines would be armed with nuclear warheads.

In his wide-ranging conversation with Bild, Netanyahu was also asked about a recent survey showing that 70 percent of Germans believed Israel pursued its own interests without consideration for other peoples, while only 21 percent believed the Jewish state respected human rights.

He attributed the findings to an “enormous misperception of Israel… which in Germany, with its particular history and its particular ties to Germany, is especially unfortunate.”

He also called on Germany and other countries to “make clear that the Egypt-Israel peace treaty must be respected,” in light of the recent political upheaval in the north African state, culminating in last month’s elections.

But he refused to be drawn on the question of whether he supported Western intervention in neighbouring Syria.

The interview comes hot on the heels of a difficult period in German-Israeli diplomatic relations. Tensions flared in April when Nobel literature laureate Günter Grass published an inflammatory poem warning that a nuclear-armed Israel “could wipe out the Iranian people [with a] first strike.”