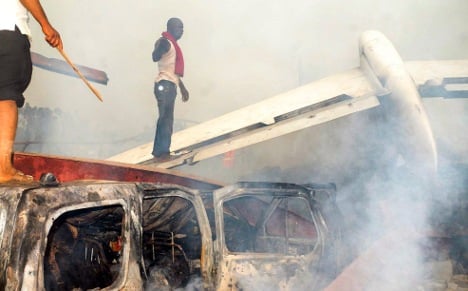 Der Spiegel magazine reported on Monday that although the death of a German national has not yet been officially confirmed, the paper says the report of a casualty has been ratified by “Nigerian security forces” and communicated to government circles in Berlin. It is thought the German was working for development agency GIZ.

The German Foreign Ministry would only tell the magazine that it was “working extensively to follow up any leads.” Typically, the ministry will not confirm an overseas death until the body has been identified by a German official and the deceased’s next of kin have been informed.

The Dana Air plane crashed on Sunday afternoon in a densely populated area of Lagos, hitting at least two residential buildings, and breaking into several pieces.

Local authorities say there were no survivors among the roughly 150 passengers and crew, despite early eyewitness reports suggesting a little girl was pulled alive from the wreckage. It is thought highly likely that there were further casualties on the ground.

The exact cause of the crash is still not clear, but local aviation authorities have suggested the aircraft grazed a power-line shortly before the disaster. The pilot radioed an emergency at 3:43pm local time, and a minute later the plane disappeared from air traffic radar.

Der Spiegel reported that rescue efforts were hampered by a shortage of extinguishing water and the emergency vehicles‘ difficulty in negotiating the crowded and narrow streets.

The jet was en route to Lagos from the Nigerian capital Abuja. The accident has prompted renewed questions about air safety in the populous west African republic – this is the seventh major aviation disaster there since 1992.