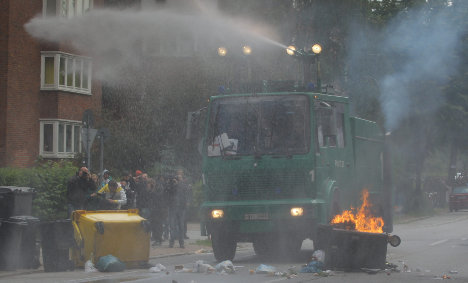 Clashes in Hamburg between those who support and oppose neo-Nazi groups erupted in violence on Saturday, as the two sides battled it out in the city’s Wandsbek district, leaving it in ruins.

Eye witnesses described the neighbourhod as looking “like a warzone” after neo-Nazis tried to block the anti-Nazi groups and then set garbage on fire. The police fought back with water cannons.

Before that anti-Nazi demonstrators greeted police by throwing rocks at them. Eight officers were hurt. The police took as many as 700 people into custody.

By midday there were about 1,000 police officers on the streets trying to control the opposing factions. A police helicopter was also deployed, a spokesperson said.

Not everyone was violent. Earlier in the day some 3,000 anti-Nazi protestors marched in the streets of Hamburg and later about 10,000 gathered to protest against the far-right.

The clashes come after police found eight of their larger vehicles on fire and three police cars also affected by the flames early Saturday morning.

“An investigation is under way,” a police spokesman said, adding that officials suspect the attack is connected to the neo-Nazi demonstration.

The burning vehicles were located in the parking lot of the hotel where police were staying.

Police did not have an estimate as to how many Nazi protestors are expected on Saturday. The Hamburger Abendblatt newspaper said thousands are expected.

Hamburg appears to be a popular spot for such demonstrations. Just one month ago the city was home to another large anti-Nazi demonstration, in which thousands took to the streets to protest against the far-right groups.