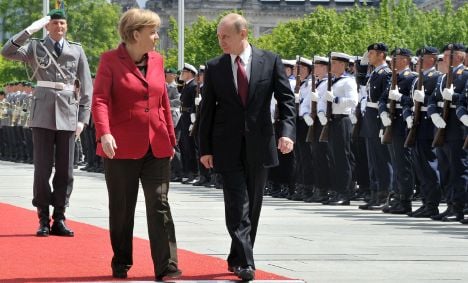 “We both made clear that we are pushing for a political solution, that the Annan plan can be a starting point but that everything must be done in the United Nations Security Council to implement this plan,” Merkel said, referring to the peace plan being mediated by UN special envoy Kofi Annan.

Speaking to reporters, Putin ruled out a military intervention to stop the bloodshed in Syria. “You cannot do anything with force,” he said.

Putin said the deadly strife in Syria risked tearing the country in two. “Today we are seeing emerging elements of civil war,” he told reporters. “It is extremely dangerous.” But he hit back at suggestions Moscow was supplying arms for use in Syria, saying his country did not deliver weapons to be deployed in civil conflicts.

The president, on his first trip to the West since returning to the Kremlin for a third term, insisted his country was not siding with President Bashar al-Assad’s regime against the opposition. “We are supporting neither side from which the danger of civil war is coming,” he said. And he stressed that a negotiated solution was the only answer to the crisis.

“This is what we talked about with the German chancellor – to find a political solution to these problems. Can it be done or not? On the whole, I believe it is possible,” he said. “It requires certain professionalism and patience. You cannot do anything by force and expect an immediate effect. A lot of people are involved in the conflict with various interests,” he said. “There is a need to find a convergence of these interests and have them sit down at a negotiating table. That’s the direction we are going to work in.”

He said that Moscow was interested in keeping the lines of communication to Damascus open. “It goes without saying that we will be in touch with President Assad and the Syrian leadership.”

The meeting came amid mounting pressure for Moscow to drop its resistance to tougher UN action on Syria. Putin was to meet new French President Francois Hollande in Paris later Friday.

Earlier, Merkel greeted Putin with military honours on a red carpet outside her offices in central Berlin as demonstrators waving Syrian flags shouted and whistled. One protestor held a banner resembling a Russian flag with the words “Putin is a thief” in Russian emblazoned across it.

The brief trips to Berlin and Paris come amid mounting anger in the West against Syrian President Bashar al-Assad’s regime after a massacre in the town of Houla last week. Germany, France, Britain, the United States and other Western nations expelled Syrian diplomats in protest at the slaughter of 108 people, including women and children, many of whom were summarily executed, according to the UN.

Commercial ties between Germany and Russia have grown strongly in recent years despite criticism of Russia’s human rights record.

The head of Russian gas giant Gazprom, Alexei Miller said on Thursday that his company had hired German football superstar Franz Beckenbauer as sports ambassador for Russia. The 66-year-old is to promote major sporting events in Russia, which is to host the Winter Olympics in 2014 as well as the football World Cup in 2018.

Beckenbauer’s office confirmed that he had agreed to an agreement for “several years” with the organization of Russian gas producers (RGO), which is led by Gazprom. Beckenbauer, who is honorary president of Bayern Munich, said during a RGO meeting in Slovenia, that he could foresee changes at his club. “Bayern Munich’s team bus will perhaps be driven with gas instead of petrol at some time in the future,” Beckenbauer quipped.