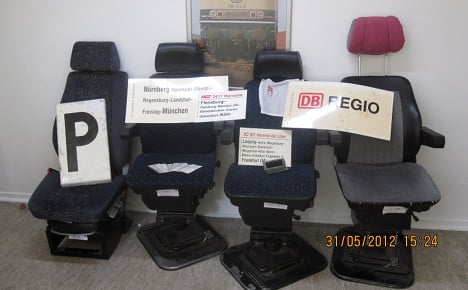 The 34-year-old kleptomanic conductor is suspected of stealing the unusual collection from work – but saw his entire collection loaded into three trucks and taken away.

Police special forces were sent to the house on Wednesday after the man’s house-mate told the authorities he had a gun.

But they found no threat – simply more than 6,000 train destination signs, four train driver seats and fully functioning radio equipment which Die Welt newspaper said was for eavesdropping on his bosses’ conversations.

The man also had an impressive collection of rail cards, wallets and bank cards that police believe had belonged to passengers, although it was not clear if they had been left behind on trains, or stolen from someone directly.

Sick of wading through what he called the “seedy collection” the man’s house-mate had called the police, warning them that the kleptomanic conductor had a gun and several large, sharp knives.

How long the man had been stealing for was unknown, a police spokesman said, adding that the haul was now taking up several rooms in the Stuttgart station and was being sorted through by officers.

It is also not yet clear what led to the man going off the rails, but he now faces charges of theft.