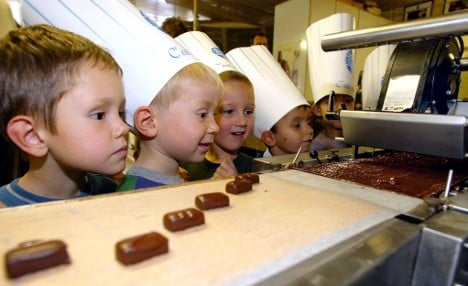 It may not be Ferrero, but these kids are excited about the chocolate Photo: DPA

Just days before the European Championship kicks off, Italian chocolate producer Ferrero has rolled out editions of its popular Duplo, Kinder Riegel and Hanuta bars with images of players from the German national team.

Each bar wrapper has points to collect which can be exchanged for football souvenirs such as an official German Football Association (DFB) “fan jersey”. But as Friday’s Tagesspiegel newspaper reported, fans need to rack up 100 points to get their hands on one of the coveted shirts. That means eating some 500 Kinder Riegel or children’s chocolate bars.

Nutrition campaign group Foodwatch has calculated that it amounts to consuming 5.5 kilos of sugar and 3.6 kilos of fat – the equivalent of around 1,800 sugar cubes and 18 packs of butter. This would require a child to consume 59,000 calories in order to get a “fan shirt.”

“It’s irresponsible when the German Football Association contributes to the European Championship being abused to serve children especially as many calories as possible,” Matthias Wolfschmidt, deputy head of Foodwatch, told the Tagesspiegel. He called on the DFB to end the cooperation with Ferrero.

Foodwatch has also calculated how much activity would be needed to burn all those Ferrero calories – fans would need to play more than 60 full-scale, 90-minute football games in order to lose those extra pounds.

That would be playing all the European Championship fixtures, from the qualifiers to the finals – twice over.