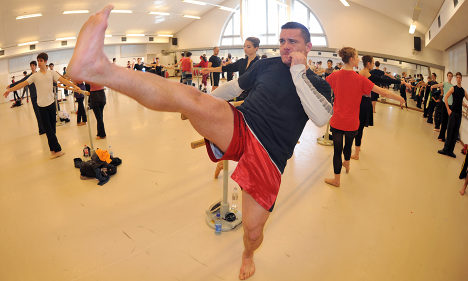 This is the man who did actually die. Photo: DPA

The man, named only as Besim N., was flooded with phone calls and found bunches of flowers on his doorstep in December 2011 after a Munich newspaper mistakenly put his photo on a story about the death of a champion Thai-boxer.

The 35-year-old German-Kosovan boxing star Besim Kabashi had been found dead in his flat in the city.

News soon spread to Kosovo where Kabashi was from – and where Besim N.’s mother lived, the Süddeutsche Zeitung newspaper reported on Thursday. She literally had a heart attack when she saw a regional television report which also used the image of her son.

Besim N., who then had to fly from Germany to Kosovo to convince his mother he was alive – and had also been sent home from his job at a restaurant because his phone was continuously ringing with concerned friends and family.

The following January, apparently without warning, Besim N. lost his job. He told a state court how he could think of no other reason this would be for, other than being dismissed for the day when the news of his “death” broke.

He sued the newspaper, claiming €7,000 for the upset, the costs of flying to Kosovo to see his mother and the loss of his job.

But the Munich district court said it was not proven that the slip-up caused him to lose his job and the judge ruled it was not defamatory to mistakenly say a person was dead. The paper’s lawyers argued that because editors had printed a correction as soon as they could, it was no more than an embarrassing mistake.

The judge did suggest the paper cover the costs of Besim N.’s flight to Kosovo, which they did, sending him away with €300.