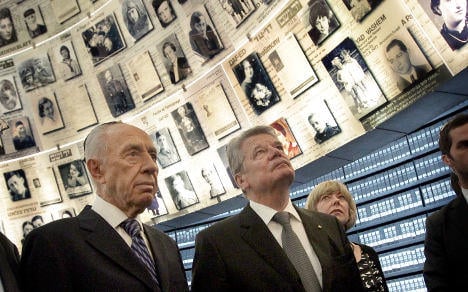 Speaking in Jerusalem where he was welcomed by his Israeli counterpart, President Shimon Peres, Gauck said that German would be the last country to abandon Israel.

On the eve of his visit, a survey showed that 59 percent of Germans viewed Israel as “aggressive” and thought the country pursued its interests without consideration for other nations. Another 60 percent said Germany had no special obligation toward Israel.

And Gauck said he was worried about the critical view many of his fellow Germans have of Israel, the Süddeutsche Zeitung reported.

During his visit with Peres, Gauck said the nuclear program in Iran caused him great concern, but added, according to the website of the news show Tagesschau, that “Germany and its partners want, in their negotiations with Iran, to reach concrete results that help secure the peace.”

After his discussions with Peres, Gauck visited the Holocaust memorial Yad Vashem, where he met Holocaust survivors. In the memorial’s guest book, he wrote, among other things, “If you have been here, you should come again. At first, there is only the flood of feelings, shock at the scale of the evil, sympathy, empathy, and sorrow, whether it is for the fate of one single child, or for the millions of innocent victims.”

After visiting the memorial’s monument to the children killed during the Holocaust, Gauck and his partner Daniela Schadt were reportedly visibly moved.

Gauck also met survivors of the 1972 attack at the Munich Olympics, during which Palestinian terrorists held hostage and killed 11 Israeli coaches and athletes.

To mark the 40th anniversary of the massacre, Israel has asked for a moment of silence to be held at the beginning of the 2012 summer Olympics in London, a suggestion rejected by the International Olympic Committee (IOC).

Gauck promised the survivors that he would look into the reasons for the denial, the news agency DPA reported.