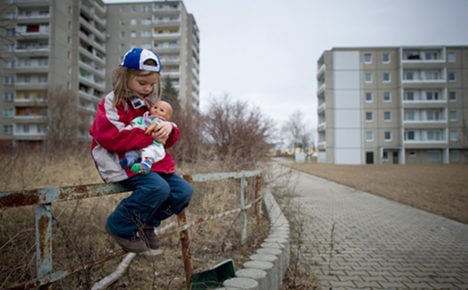 Germany ranked 15th in the new UNICEF study, which examined the living situation of children across 29 European nations. The study found that 1.2 million German children are deprived of two or more daily necessities.

The study looked at 14 different factors in a child’s daily life, such as a diet that includes fruit and vegetables, access to the Internet, occasional new items of clothing and the opportunity to play sport. The study found 13 million children across Europe lacking two or more of these essentials.

Free time was what children lacked the most in Germany. One in 20 German children regularly goes without any warm food during the day, according to the study. Nearly five percent were found to have nowhere to do their homework, and 3.7 percent were managing with just one pair of shoes.

More than 40 percent of German children who UNICEF deemed deprived came from households where both parents were unemployed, and another 35 percent had parents with low-level job qualifications.

Christian Schneider, the head of the charity’s German branch, blamed political obstacles for getting in the way of helping children who, in a rich industrialized nation, should not lack basic necessities.

“It is disappointing that our country cannot make a determined effort to improve the general standard of living for children,” said Schneider.

The study found that Iceland had the best conditions for children, with less than one percent of its children living in hardship, followed by Sweden, Norway and Finland. In Romania, which ranked at the bottom of the survey, 72 percent of children lack two or more basic necessities.

The study was carried out to build a better picture of how poor children live in some of the world’s more developed countries. The findings have left UNICEF experts alarmed, prompting them to recommend that children’s living conditions be studied once a year.