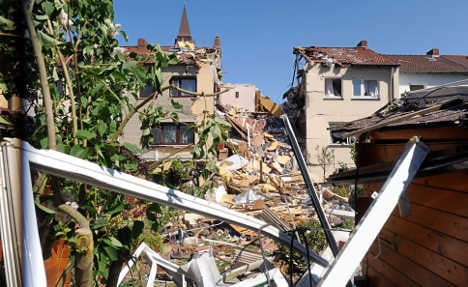 As their 68-year-old neighbour opened the door on Sunday morning to check on the house and water the plants, the house exploded, burying him in rubble.

Emergency services who attended the scene in the northern town of Bremerhaven dug him out after hearing his calls for help, but he was seriously injured and was flown to Hamburg for treatment.

Two children playing outside nearby were slightly hurt by flying debris but did not need hospital treatment.

Authorities have launched an investigation, but it is thought a gas leak led to the enormous explosion – sparked by the good neighbour as he turned on a light. Several houses in the same row were also damaged by the explosion.

The Bild newspaper reported on Tuesday that the couple were being put up in a nearby hotel and have been offered psychological counselling.