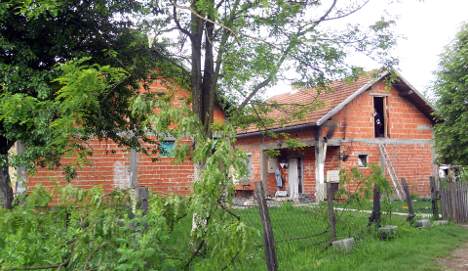 The house where the girl was held. .Photo: DPA

A neighbour who raised the alarm told AFP he witnessed the couple treating the girl, now 19, like an animal.

Milenko and Slavojka Marinkovic were arrested at their home in a village in the northwestern Tuzla region after police received the tip-off from neighbour Sead Makalic earlier this month.

“They kept her locked up, neither allowing her contact with other people, nor to go to school,” police spokesman Admir Arnautovic told FTV public television. “They subjected her to inhumane treatment and torture.”

The couple were arrested on May 17 but police on Sunday said they could not reveal further details of the case, while prosecutors were not available for comment.

The girl, who has not been named by police, had been placed in a safe house and was receiving medical treatment, investigators quoted by FTV said.

Makalic said he remembered the German girl appearing in the village of Karavlasi with her mother and two sisters but did not take much notice of her arrival.

“At the time I was helping them (the Marinkovic couple) to build their house and I did not pay attention,” Makalic said.

Years later, he said he saw her eating pumpkin and corn grain used to feed the couple’s pigs.

One day, he said, he saw them make her pull a horse-cart “while they were sitting on it”.

“They put her in place of the horse and were laughing,” he said.

According to Makalic, the couple were from a “Roma family in which several brothers lived together, often travelling to Germany and Austria.

He said he had tried to alert police earlier. “But when the police came they hid her very well,” he said.

Earlier this year he had not seen her for about a year and was told by the couple that she was in Germany.

But “when I saw her again on May 15, I took a picture of her with my mobile telephone and went to alert the police”, he said.

Miko Marinkovic, a brother of the suspect who had returned from Austria where he lives, on Sunday told AFP in Karavlasi that the allegations were nothing more than fabrications.

“We have never mistreated” her, he said. “It will be proved.”

“This is all a lie. We live well here. Those people made up all of this,” she said.

Local media reported that the girl had arrived in Bosnia from Germany eight years ago with her mother.

The mother had lived between Karavlasi and Germany for several years and was in the village at the time of the arrests, they said.

They added that the girl’s mother could have entered into a sham marriage with Milenko Marinkovic to allow him to obtain a German residency permit.

Quoting officials, they said she was found in a forest and was in a poor physical and psychological state.

They said she could have been abused by friends of the Marinkovic family who visited them regularly.