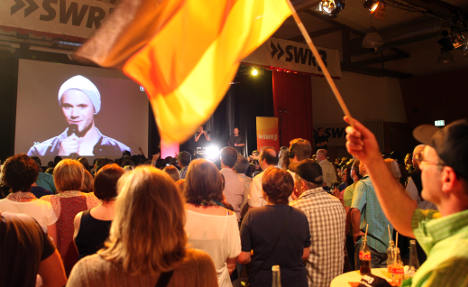 It was Sweden’s fifth title while Lob’s result was Germany’s second best performance in the last decade after Lena’s victory in 2010, according to Die Welt newspaper on Saturday.

“I am super happy,” the 21-year-old said afterwards, saying he had aimed to get into the top ten. He said the Swedish performance was “super” and added that he had had a “super” time in the Azerbaijani capital Baku.

The Eurovision decision is made from 50 percent national juries and 50 percent telephone voting.

German television’s hostess for the evening, comic and presenter Anke Engelke managed to inject a subtle political element to the vacuous chat that is generally expected.

“Tonight no-one can vote for their own country. But it is good to vote and it is good to have a choice. Good luck on your journey, Azerbaijan. Europe is watchin you,” she said.

The lack of political freedom in the host country has attracted criticism, while the regime used its hosting of the glittering event as an opportunity to promote itself – after arresting dozens of protesters ahead of the contest.

While Loreen’s rendition of “Euphoria” left the Swedes ecstatic, she was followed in the final rankings by the “pop grannies” from Russia with their unlikely song “Party for Everybody”. The Serb, Azerbaijani and Albanian entries came third, fourth and fifth respectively.

Britain’s entry, the veteran crooner Engelbert Humperdinck had the humiliation of coming 25th – out of 26, with only the Norwegian contestant doing worse.