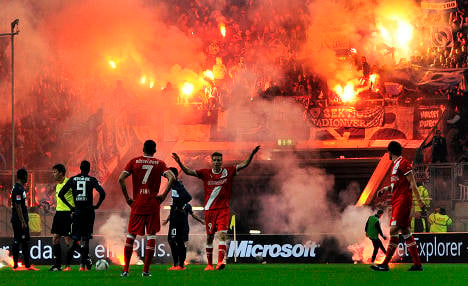 The club failed to convince the federal court of the German Football Association (DFB) that its players had feared for their lives and were unable to give it their all in the final minutes of a relegation game with Fortuna Düsseldorf.

The Berliners protested the game, played in Düsseldorf, after the home fans stormed the field with more than a minute left to play. Hertha’s lawyer said the team had to run quickly off the field, fearing violence from local fans.

After a 20-minute delay, the players returned for the remaining time. The game ended 2-2, but because second league team Düsseldorf had won the previous match, it climbs to the top league and Hertha drops down.

The court – in a 10-hour session that finally broke up about an hour before midnight – said it determined that there was not a widespread, consistent fear among the Hertha players and it believed the team was not psychologically weakened by the events.

The club has one last chance to appeal, which it hasn’t ruled out, but the paper said Berlin fans needed to realize that its team would more than likely be relegated to the second league.