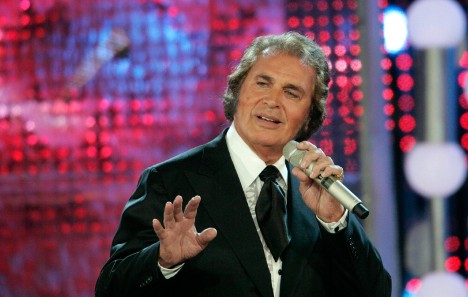 Humperdinck was interviewed in Germany’s mass-circulation Bild newspaper on Tuesday under the provocative headline “Engelbert is our true star for Baku!” ahead of Saturday’s clash of the kitsch in the Azerbaijani capital.

The 76-year-old singer, whose career has been revived from a showbiz-coma by the UK’s decision to call him up for Eurovision, provoked ancient rivalries by telling the paper, “My blood is English, but my heart beats for Germany. That’s why I am singing on Saturday for all Germans, especially for German women!”

To drive home the depth of his feeling for the German nation, Humperdinck posed for a photo draped in the black, red and gold German flag.

Humperdinck’s life in show business seemingly stretches back to the last ice age. He began playing the saxophone in UK nightclubs in the 1950s before releasing his first album in 1967. Though his father was a British army officer, his German family connections are as strong as the Queen’s. “My grandfather was German, my mother was German,” he told Bild. “For my military service I went to Mülheim in the Ruhr region.”

But a major factor in the crooner’s Teutonophilia is his faithful German fanbase – Humperdinck’s easy-listening light pop has always been the German’s cup of tea, effectively making him the David Hasselhoff of the 1960s and 1970s. In his heyday, Humperdinck was often presented as a Tom Jones’ style ladies man, photographed with semi-nude women.

“Later I had some of my biggest successes in your beautiful country, where I still feel at home today,” the Hump gushed to the Bild.

The UK’s biggest-selling tabloid The Sun professed outrage at the Humperdinck interview, saying that he had “shocked fans” by his “unpatriotic” statements, while one British journalist at a press conference in Baku told him that “he could not sing for two countries.”

The singer did his best to assuage The Sun’s rage by saying the Bild interview had just been a bit of fun to win German votes for his Eurovision ballad “Love Will Set You Free.”

“My mother was German so my blood is half German. But of course my heart belongs to the UK,” he hastily told the paper.