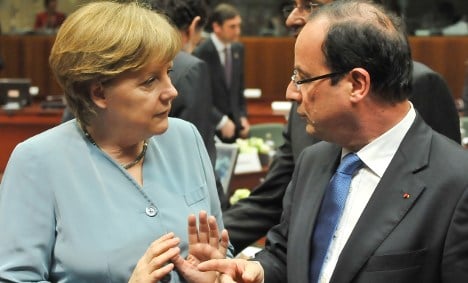 “We have to act straight away for growth,” French President Francois Hollande insisted amid deepening worries over Greece’s eurozone future and Spain’s troubled banks. “Otherwise there will still be doubt on the markets.”

“We have no time to waste,” the freshly elected Socialist leader stressed at his first EU summit after a cost-conscious train ride from Paris.

German Chancellor Angela Merkel faced pressure to give ground on her hardline austerity doctrine as the European single currency fell to $1.2564 and London, Frankfurt and Paris stock exchanges each shed well over two percent.

She also rejected a call by Hollande for eurobonds – jointly pooled eurozone debt – on the grounds they are “not a contribution to stimulating growth in the eurozone” and adding that such instruments ran contrary to EU treaties.

Yet in a German press interview appearing on Thursday, Merkel’s finance minister Wolfgang Schäuble maintained that “the differences between ourselves and France are not so great.”

Schäuble said Hollande wants more done to kick-start growth, but insisted that the French president “does not want to water down” a treaty obliging balanced budgets the Frenchman initially said he wanted to re-negotiate.

“We’re not talking about an easing of budgetary discipline,” Schäuble insisted.

A member of Hollande’s entourage said he was “floating ideas” but “not coming to Brussels with a Kalashnikov.”

Non-euro Britain also flexed its muscles, ruling out in advance other core ideas put forward by European Union officials and backed by Hollande – including a tax on financial transactions.

Opening the dinner talks, EU president Herman Van Rompuy underlined the need to find “a strong will to compromise” with the risk of knock-on effects from a Greek eurozone exit exercising markets.

After Germany’s central bank said the picture in Athens ahead of June 17 elections was “highly alarming,” leaders were expected to remind Greek voters that they expect Athens to honour a €237 billion ($300 billion) bailout deal agreed in March.

“I don’t believe we can afford to allow this issue to be endlessly fudged or put off,” said British Prime Minister David Cameron, urging the European Central Bank (ECB) to do more.

Treasury officials from the other 16 eurozone member states were told this week to “reflect” on what an exit would mean for their economies, a diplomat from one eurozone country told AFP.

The Greek finance ministry in Athens “categorically” denied this was the case.

Spanish Prime Minister Mariano Rajoy said Spain did not require the support of European rescue funds, saying there were “faster instruments” – an apparent allusion to the ECB which has previously bought government bonds in sell-on markets.

Analysts see this as inevitable, with consultant Sony Kapoor warning that Spain otherwise “is headed towards needing a fully-fledged bailout.”

Wednesday’s talks were set to endorse a trial for €230 million in seed money from the EU’s budget this year and next by way of EU “project bonds.”

This is intended to attract €4.5 billion of long-term private investment for Europe’s incomplete energy, transport and digital networks.

Other ideas on the table included a €10-billion boost to European Investment Bank (EIB).