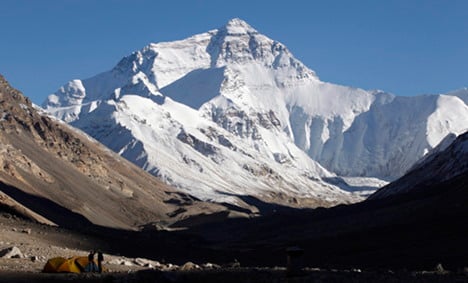 The 61-year-old doctor, Eberhard Schaaf, died on Saturday of extreme altitude sickness while descending the south side of the mountain, Ang Tshering Sherpa of the Kathmandu-based Asian Trekking adventure agency said.

“Climbers spend their energy on the ascent and they are exhausted and fatigued on the descent,” Tshering explained.

Daily newspaper Bild said Schaaf, a passionate mountaineer from Aachen, North Rhine-Westphalia, was taking part in the “Eco Everest Expedition”, a clean-up operation that since 2008 has cleared over 13 tonnes of rubbish from the mountain.

But severe altitude sickness caused Schaaf to develop swelling in the brain, which killed him.

“After assessing the symptoms, the medical staff at the Himalayan Rescue Association believe the cause of death to be High Altitude Cerebral Edema,” a press release from Asain Trekking said.

“Our thoughts go out to the family of the deceased at this moment and we offer any assistance at this difficult time.”

The mountain, which lies in the Himalayas, Nepal, also claimed the lives of a South Korean woman and a Nepali-born Canadian woman over the weekend. A Chinese climber and Nepali mountain guide are still missing.

Sherpa said South Korean Song Won-Bin, who had been missing since Saturday, died at “The Balcony”, an area near the top of the 8,848-metre (29,029-feet) peak.