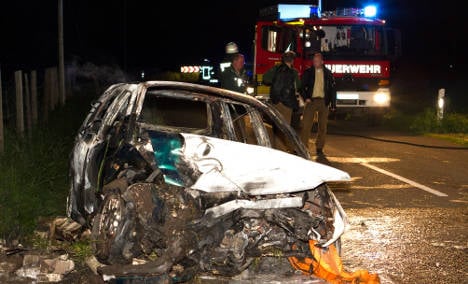 The 18-year-old woman and two men aged 20 and 21, were driving near Coesfeld in the Münster region in the early hours of Saturday when they crashed – and their car burst into flames.

According to Saturday’s Die Welt newspaper, several people living nearby heard the smash, raced to the scene and pulled the young people from the car, which had rolled onto its side.

At least two of the helpers inhaled so much toxic smoke they were taken to hospital along with the three people from the car. One of the young men was seriously injured in the crash.

Three other people died in their car on Thursday when it also caught fire following a crash near Petersberg, Hesse. The only survivor was a 14-year-old boy.