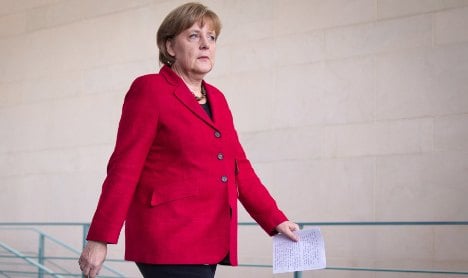 Merkel sacked Norbert Röttgen from his post as environment minister on Wednesday – seemingly without giving him the opportunity to save face – after he led her Christian Democratic Union (CDU) to a crushing loss in the state election in North Rhine-Westphalia.

That defeat was handed to him by Social Democratic Party (SPD) politician Hannelore Kraft who was afterwards described as a “Merkel in Red” and potential threat to the chancellor.

Just how much of a threat Kraft might be was demonstrated in a poll conducted for the weekly newspaper Die Zeit, which showed if there were a direct election between the two women, Kraft would beat Merkel with 43 percent of the vote to 34 percent.

Kraft was particularly strong in her home state and in Berlin, where more than 50 percent of those polled favoured her. Every fifth voter usually loyal to Merkel’s CDU would vote for Kraft, the poll showed – and it was conducted before Merkel fired Röttgen as environment minister.

That action took more than a few by surprise. Wolfgang Bosbach, a CDU senior member, complained that Röttgen “had gone within a few hours from the great white hope of the union to the only person being blamed for the awful defeat in North Rhine-Westphalia.”

This all happened “much too quickly,” Bosbach told Friday’s Süddeutsche Zeitung newspaper.

Meanwhile, Norbert Lammert, another CDU politician who is also speaker of the Bundestag lower house of parliament, called the sacking “regrettable for the party as a whole.”

But others praised her solid, if tough decision. “The chancellor’s course of action was not hard, rather consistent,” CDU politician and former East German civil rights leader Vera Lengsfeld told the Handelsblatt newspaper.

Röttgen had tried to pull Merkel into his state election defeat and should have known, “that the chancellor will not let herself be given the run-around.”

The fall-out of Röttgen’s sacking dominated Germany’s front pages on Friday, with the Frankfurter Allgemeine Zeitung daily judging: “Never before has Merkel been so cold as ice in sending a minister packing, but she herself is damaged by this brutal act.”

Many papers said Merkel, sometimes dubbed Mutti or “Mummy” for her occasionally matronly air, has shown a more steely side to her character, with around 16 months to go until she bids for a third term in national elections.

“She knew Röttgen’s time had come, and that he was causing more damage than benefit. The message is that the battle for the chancellery has begun, and Merkel is prepared to fight.”