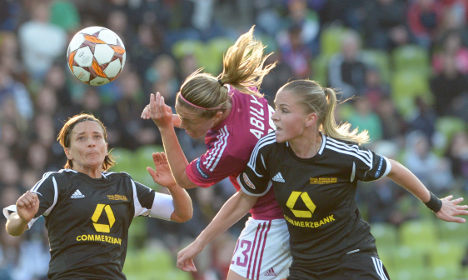 Just two million people tuned in to watch the match between FFC Frankfurt and Olympique Lyonnais – nothing in comparison to the 300 million expected to watch Saturday’s men’s equivalent between Chelsea and Bayern Munich.

The situation infuriates those organising football for women and young girls, who say female football is discriminated against in Germany, by both the organisations designed to promote it and the public at large.

“I believe that if FIFA (the international football association) would support women’s football more and not just talk about supporting it, a lot more would happen,” said the manager of the women’s division of a Berlin football club who asked to remain anonymous.

“And I see that with the DFB,” she said, referring to the German Football Association. There’s a lot of lip service that is given toward promoting girls’ football, but when it comes down to it, the boys are favoured, she said.

Thursday’s match was shown at 6pm on the public broadcaster ARD. A spokesman for the channel said this was not a bad time, given that Thursday was a holiday, but he noted that men’s matches are broadcast live at 8pm, a more convenient time for many viewers.

ARD broadcast last year’s women’s World Cup matches live for the first time and they drew about 10 million viewers or 32 percent of the market.

But those numbers have not been sustained. Thursday’s two million viewers who saw Olympique Lyonnais beat 1. FFC Frankfurt 2-0 amounted to about 11 percent of the market.

By comparison, a men’s international friendly would pull in around 11 million viewers or about 35 percent of the market, the ARD spokesman said.

Last year the Women’s World Cup took place in Germany, prompting hopes for a huge boom in female football star-wannabes, but this has failed to materialise and the sport remains marginal compared to the overwhelming popularity of its male counterpart, football experts say.

“It’s not what we thought it would be,” Kevin Langner, spokesman for the Berlin Football Association told The Local.

Figures from the Berlin association show there remains much to do if female participation in the sport is to come anywhere close to male interest.

As of the beginning of this year there were 4,378 girls playing the sport in a Berlin club, up some 500 from the year before. The figures are for girls under 16 who play in one of the 126 clubs or Verein in this age group.

Langner said the trouble came not only from fathers who do not want their girls to play football – but from a wide variety of sports alternatives, like swimming, volleyball and handball.

For boys, football is number one, way ahead of other sports like basketball.

Those involved with girls’ football say the situation has developed into a vicious cycle. The boys get more sponsors, which in turn allow them to hire additional trainers and related personnel, like physical therapists. They earn more and there are more opportunities.

How did the women’s team get so good?

Carina Sophia Linne, a professor at the University of Potsdam and author of a book about women’s football, says discrimination against women footballers goes way back in Germany. In 1955 the DFB banned women from all its clubs in west Germany – a prohibition that wasn’t lifted until 1970.

Today, with relatively few girls going out for the sport, it is sometimes hard to understand how the German women became so good. They won two World Cups back to back – something the German men have yet to achieve.

Linne says girls stay in the sport because they love it and they are not trying to compare themselves with the boys.

“It always comes down to a comparison with the men,” she said. “Women’s football is a different sport.”

And once the public understands that, she says, the sport is likely to be better accepted.