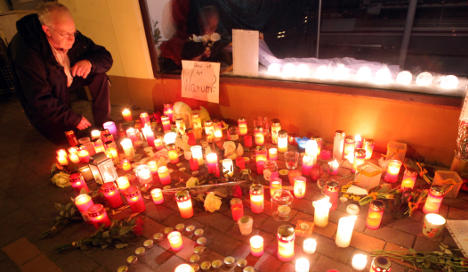 Candles at an ad hoc memorial for Arzu. Photo: DPA

The 18-year-old woman, identified only as Arzu Ö., was violently kidnapped from her boyfriend’s flat in Detmold, North Rhine-Westphalia, last November, and taken to a motorway services station where she was shot dead.

Judge Michael Reineke heard that she had been beaten several times by members of her own family, particularly her brother Osman, and that in September 2011 she had fled to a refuge and filed official complaints against her brother and father.

“That was pretty much her death sentence,” the judge said, according to a report in the Berliner Zeitung newspaper on Wednesday. Referring to the Kurdish roots and Yazidi faith, he said that those who live in Germany must live by the values of this country, and not those of their origin.

Her brother Osman, 22, was jailed for life for her murder after having admitted to firing the shots.

Her sister Sirin, 27, and brother Kirer, 25, both received 10-year sentences for kidnapping her and assisting in her killing. Her brothers Elvis, 21, and Kemal, 24, got five and-a-half years in jail for the kidnapping.

State prosecutor Ralf Vetter had asked for life imprisonment not only for Osman but for Sirin and Kirer and called for Kemal and Elvis to be given at least 11 years in prison.

The lawyers for Elvis, Kirer and Osman want to appeal the sentences.