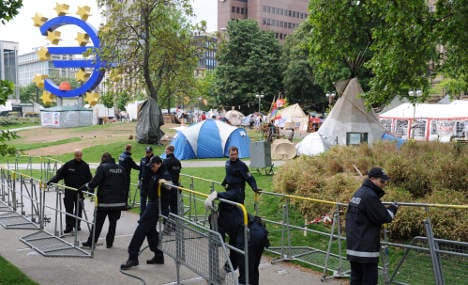 The camp was peacefully cleared by midday on Wednesday, with police carrying the protesters away after a court had ruled they had to leave the area surrounding the Euro sign in front of the European Central Bank (ECB).

Around 40 groups had designated the long weekend one of action to protest the power of banks and “the Europe-wide impoverishment policies”. The groups, which included trade unions, the globalisation critics Attac and various left-wing initiatives adopted the slogan “Blockupy” for the weekend.

The protest was supposed to kick off on Thursday, a bank holiday, when the plan was to occupy central squares, and on Friday a blockade of the ECB was planned. A court had disallowed many of the planned demonstrations, although a rally on Saturday was granted permission. It was expected that many protesters would try to blockade the banks regardless and fears of violence rose during the early part of the week.

By Tuesday evening metro stations had been closed and the Commerzbank said it was going to close its two sky scrapers, while the German Central Bank confirmed on Wednesday it had held a meeting of ECB executives on Tuesday – a day earlier than planned.

And the farewell ceremony for departing ECB executive board member Jose Manuel Gonzalez-Paramo, due to be held in a city centre luxury hotel on Wednesday, was moved to a venue in the countryside.

“Commerzbank branches located in the security zone of the Frankfurt inner city will at least partly and for some time be closed,” a spokeswoman for the company told Wednesday’s Handelsblatt newspaper.

Helaba bank told its staff to take Friday off or work from home to avoid having to come into the city, while the state-owned KfW bank gave its staff similar advice and was expecting less than 20 percent of its 2,500 workers to show up, the paper said.