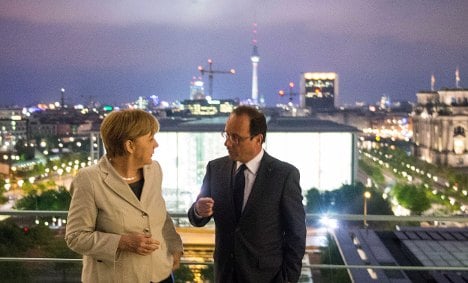 With all eyes on their first-ever talks, the two leaders also vowed that the two European powerhouses were aware of their responsibilities and ready to help find solutions to the eurozone crisis.

Hollande, the newly inaugurated French Socialist, arrived late for his first talks with Merkel after his plane was apparently struck by lightning and had to return to Paris where he changed aircraft.

Hanging over the meeting was the grim news from Athens, which is now set to hold another round of elections likely on June 17 after efforts to form a government after inclusive polls foundered, setting up yet another month of brinkmanship at the crippled heart of the eurozone.

But the eurozone’s two biggest economies want Greece to stay in the single currency, Merkel said a joint press conference with Hollande.

Paris and Berlin were prepared “to study the possibility of additional growth measures in Greece” if Athens said they needed them, she added.

Hollande for his part called for “balanced” and “respectful” relations with Germany, while adding he was prepared to put “everything on the table” at an informal EU summit next week, including eurobonds, a point of friction with the Germans.

The anti-austerity message sent by Greek voters has made the future of the deal for a massive EU-IMF bailout to rescue Greece’s finances uncertain.

International Monetary Fund head Christine Lagarde raised the possibility on Tuesday that Greece could leave the currency union in the clearest sign yet that leaders are preparing the ground for the exit.

“If the country’s budgetary commitments are not honoured, there are appropriate revisions to do … which in this case must be an orderly exit,” Lagarde said in an interview with France 24 television.

Hollande has vowed to make economic growth a key component of eurozone austerity efforts to reduce debts, and he got a timely boost from US Treasury Secretary Timothy Geithner.

“We should welcome this new debate about growth in Europe,” Geithner said at a conference in Washington.

After talks with Hollande, conservative Merkel, a proponent of austerity measures to rein in debt, said she had “points in common” with the new French leader on the way to boost growth in the eurozone.

The European Commission announced earlier that growth in the eurozone stagnated, with zero expansion in the first quarter, surprising analysts who had expected a fall of 0.2 percent.

In Greece, at imminent risk of being forced from the eurozone if a new government rejects tough debt rescue conditions, political leaders failed in a last-hope effort to form a government of non-political experts, as in Italy.

“The Greek people must now make the right decisions for the good of the country,” said Venizelos.

The precarious financial situation was also highlighted when President Carolos Papoulias reported some €700 million were withdrawn from Greek banks on Monday and warned the situation could worsen in coming days.

Stock markets worldwide fell on Tuesday, in large part because of the dire situation in Greece and the uncertainty this is generating over the future of policy in the eurozone.

“Investors are pricing in a Greek exit from monetary union with a risk that it could turn out to be disorderly,” said VTB Capital analyst Neil MacKinnon.

Analyst Mike McCudden at online brokerage Interactive Investor said: “Faced with the ongoing turmoil in the eurozone, nerves are shredded and traders are particularly sensitive to any news which comes their way.

“Reaction to news of the Greek election was enough to confirm to traders that Greece is indeed heading for the exit,” he said.