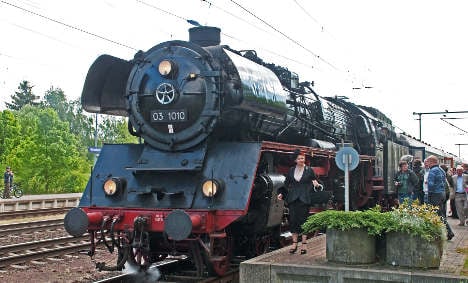 “Its future is assured,” Brian Moynahan wrote in a 1981 Sunday Times feature, noting that the train was so reliable, “locals set their watches by it.”

The British Military Train – known as The Berliner – would trace its 145-mile course along the East German corridor from Charlottenburg in the British sector of Berlin, to Braunschweig just over the border, once every day. It was a vital link for British troops to the outside world, and often carried important freight on its way back.

Over 45 years, The Berliner, as it was known, logged just one failure. The nearest it came to crisis was a price increase in the dining-car – to an unprecedented 62p a head. “The train will never die,” the chief steward proudly told Moynahan. Ten years later, it did. In 1991 the final incarnation of The Berliner was taken off the time-table, derailed by tectonic shifts in the European political landscape.

But last weekend The Berliner rode again, echoing the days of a divided Germany. The bowels of Charlottenburg station rang with the low rumble of bagpipes, Platform 4 was thronged with blazers, berets and brass buttons, and with a triumphant plume of steam, Locomotive 03 1010 moved sedately into view.

Its resurrection was the brainchild of Train of Events, a small band of retired British railwaymen. “The project has been a year in the making,” said spokesman Tony Streeter. Fifteen carriages were faithfully restored to emulate The Berliner’s early days, with even the dining-car menu scrupulously recreated.

Party atmosphere on the train

Around 350 passengers boarded for a trip that took in all the original stops, eventually proceeding as far as Hannover. Roughly three-quarters were British, former military men or civilian engineers and their families; they were joined by German former employees of the national rail companies on both sides of the border.

Their ages varied, reflecting the fact that The Berliner ran from the aftermath of World War II to the brink of reunification. Throughout that time the train chugged its way back and forth through tense and hostile East Germany – while inside a boarding-school camaraderie reigned. The dining-car, never less than convivial, would often host musical entertainment; one sergeant talked of a “party atmosphere”.

But the relief provided by The Berliner was not merely personal – its importance to the Cold War effort was immense.

David Glossop, Officer Commanding Train between 1983 and 1985, told The Local, “It was essential that methods of access were used and maintained,” in order to maintain a Western presence in Berlin, and prevent the Soviet Union from using the city as a launch pad for Warsaw Pact aggression.

The most significant link was the rail route, which meant the duty of those in charge of The Berliner took on a “political, moral and representative importance,” he said.

John Poyntz was stationed in Germany with 79 Railway Squadron, largely based in Mönchengladbach, between the late 1960s and the late 1980s. As a railway expert he was often called to Berlin to assist the Military Train in an administrative capacity.

A copy of Playboy to overcome bureaucracy

The train made its first stop at Marienborn, just inside the old East Germany, where Soviet and British officials would exchange documents – a process which Poyntz said seemed to take forever. The best way to speed things up was to include Western “gifts” in the official papers for the Russian guards. “A copy of Playboy magazine would usually grease the wheels,” he said.

Shortly after the train crossed the old border and arrived at Helmstedt, something extraordinary happened. Helmstedt is a small, neat town, situated almost exactly in the middle of modern German borders. It is dotted with kebab shops and Polish grocers – the epitome of present day, multicultural, self-confident Germany. Yet the British veterans were welcomed with an overwhelming display of support.

As the train’s occupants disembarked and proceeded through the streets, headed by a marching band, Union flags were waved from the pavement, many of them held by small children; young men in football shirts cheered from windows above. In the town square, the group was addressed by the Minister President of Lower Saxony, David McAllister.

McAllister has a share in this history himself. The son of a British serviceman stationed in Germany, as a child he would often take The Berliner from the family home in the British settlement at the Olympic Stadium in West Berlin.

God Save The Queen and tears

Today McAllister is an elected politician in a free and united Germany – the contribution of the British forces to which, he assures his audience, “will never be forgotten.” At the conclusion of his speech, the Helmstedt church bells struck up ‘God Save The Queen’. A humbling moment, said former Officer Commanding Train Glossop.

British soldiers, a common sight in many towns across Germany, will soon be as rare as steam trains – of the 20,000 British troops still in Germany, 8,000 will leave by 2015, the rest before the end of the decade.

It is not a development that you would expect to occasion a great deal of sadness: for the Britons, it is the end of a costly engagement in a country in which their presence has for a long time not been needed; for the Germans, it marks a further demilitarisation of the country and another step in the country’s long return to geopolitical normality.

And yet there is sorrow – on both sides. As McAllister expressed his personal sadness at the departure, the veteran in front of me dabbed his eyes with a handkerchief. Despite the current fractious political climate and decades of superficial distrust, the connection between the two countries runs deep – even though for years it depended on a link no wider than a pair of railway tracks.