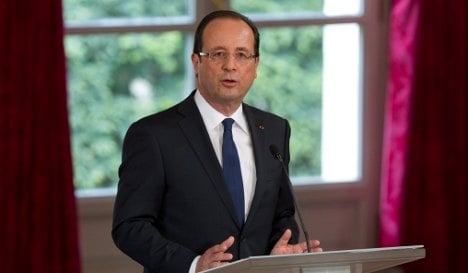 German Chancellor Angela Merkel, a conservative, has said she will greet Hollande with open arms in the tradition of the special relationship between the two driving forces in the European Union and eurozone.

But she insists that countries struggling with debt, which include France, must concentrate on deep reforms to cut spending, maybe raise taxes and certainly raise efficiency.

“Nobody on our side has anything against growth, but the question is what it means for budgetary policy,” she said Monday.

Hollande, a Socialist, accepts the need to correct budgets but wants far greater emphasis on stimulus with investment than is apparent in ideas that have been under consideration for months by the commission.

On Greece, Merkel insists that the next government must respect tough rescue conditions already agreed under the second rescue of 240 billion euros.

The gaps appear wide, although compromise is in the air as the eurozone crisis reaches a climax.

Growth and Greece are the critical focus of the talks when the two leaders are expected to cross swords, and keys, over solutions and eventually to unlock some form of compromise.

On growth, the European Commission announced that the eurozone stagnated, with zero growth in the first quarter, surprising analysts who had expected a fall of 0.2 percent.

In Greece, at imminent risk of being forced from the eurozone if a new government rejects tough debt rescue conditions, political leaders were making a last-hope effort to form a government of non-political experts, as in Italy, to replace the outgoing technocrat government of Lucas Papademos.

Otherwise the country is set for a new election on about June 17.

The head of the eurozone finance ministers Jean-Claude Juncker sought to shore up confidence late on Monday.

He condemned talk that Greece might leave the eurozone as nonsense, saying no eurozone minister had taken this line at a meeting on Monday, and stressing their “unshakeable desire” to keep Greece in the group.

But the International Monetary Fund, referring implicitly to Greece in a report, commented that “a political accident in the euro area could trigger a financial crisis engulfing the region.”

The banking sectors in Italy, where Moody’s cut sharply its ratings for 26 banks overnight, and in Spain where the top four banks have just announced extra bad loan provisions of 11.3 billion euros ($15 billion), are under pressure.

And the dangers of contagion from the Greek debt crisis to Portugal, Spain and Italy have returned in the form of a rise in their borrowing rates on the bond market.

Stock markets worldwide are on a weak trend, in large part because of the dire situation in Greece and the uncertainty this is generating over the future of policy in the eurozone. However, European stocks rallied on the news that Germany had avoided recession.

The commission forecast on Friday that the eurozone economy would shrink by 0.3 percent this year but grow by 1.0 percent next year on a “long and rocky road” to overcome problems in public finances.

It also said that there were some signs of underlying improvement in some eurozone countries enacting reforms.

At ING bank, senior economist Carsten Brzeski commented: “The German economy has not only avoided recession but could have even helped the entire eurozone economy falling into technical recession.”

At Berenberg bank, Christian Schulz said: “Germany’s very strong figures are a reminder of the strongly positive long-term effects of austerity and structural reforms. … Greece is clearly a risk and the situation around Spain’s banks remains unresolved.”

Charles Dallara, the head of the Institute of International Finance who negotiated part of the debt rescue for Greece, said that “the cost to Greece, the cost to Europe and the cost to the entire global economy may still be enough to cause Greek politicians and European politicians to pause before they pull the trigger on a Greek exit.”