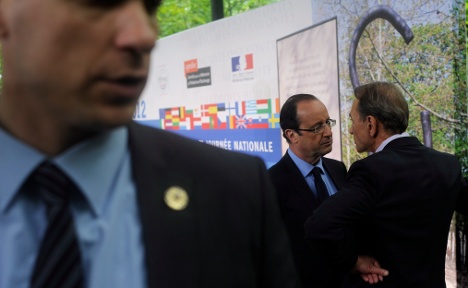 “We were not in the election in order to get a European Union president called Frau Merkel who decides the fate of all others,” said Benoit Hamon, spokesman for Hollande’s Socialist Party on Sunday.

France would be holding out for a new negotiation of the European fiscal pact, “so that the economy regains momentum through growth,” he said in an interview on France 3 television.

Monday’s Handelsblatt reported that Hamon continued to say that Merkel could “not decide alone on the fate of Europe.”

Seemingly dashing German hopes that once in power the Socialists would fall in line with the push for austerity to get the euro crisis under control, Hamon also said that policy had “led to failure” in Greece, and the crisis was spreading. There must be an “end to saving,” he said.

“We want Frau Merkel to hear this message, otherwise the contract [for the fiscal pact] will not be ratified,” he said.

Merkel would have responsibility for any clashes between France and Germany, he concluded.

“She can make promises on behalf of Germany all she wants, but we have a mandate from the French people,” he said.

A central plank of Hollande’s election campaign was to put a brake on the austerity measures in the fiscal pact, and to add a growth element to it – something Merkel has categorically ruled out.

He is due in Berlin on Tuesday just hours after being sworn in as new French president – something Merkel campaigned against, having had a close working relationship with his predecessor Nicolas Sarkozy.