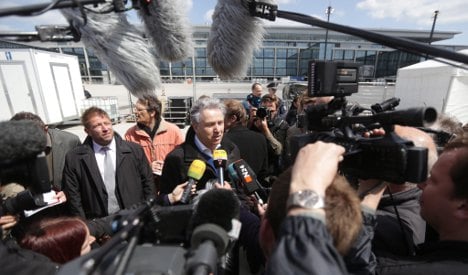 At least 50,000 curious Berliners flocked to gawp at what one described as the “construction site” of the Berlin-Brandenburg Willy Brandt airport over the weekend.

The open day was supposed to take place a few weeks before the grand opening, but last week officials admitted they were going to miss the widely advertised scheduled opening on June 3.

Berlin Mayor Klaus Wowereit drew scornful laughter when he told crowds on Saturday that despite the disastrous delay, visitors could see how far the airport had come along and that it was a “grandiose creation.”

“We’re proud of what we’ve achieved so far,” the Mayor added without irony, yet refused to name a new launch date.

Meanwhile, further details have begun to emerge of just how far the mega-project is from being ready.

A report by ORAT (Operational Readiness and Airport Transport) – a team of 13 aviation construction experts from Munich – had warned back in April that the June 3 opening was unrealistic, according to the Focus magazine on Saturday.

Only 52 percent of crucial areas – from check-in to boarding and ground traffic – are currently ready for take-off, the magazine said.

Murmurs of disbelief came from the crowd as airport chief Rainer Schwarz repeated the official line that problems with the fire escape system – such as warnings and door closure systems – had meant the site had not been given safety approval.

But this minor cock-up seems to be just the tip of the iceberg. It has been obvious for months that the airport would not be ready in time, reported the magazine.

“The airport is very far from being operational – independent of the technical systems,” an unnamed ORAT employee told Focus.