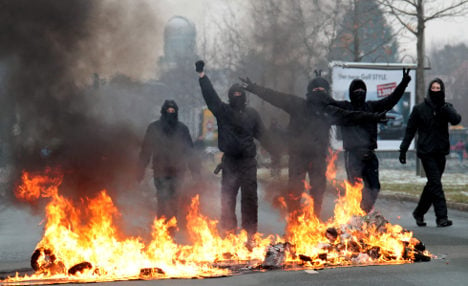 The interior ministry said the number of politically motivated violent incidents rose from 2,636 in 2010 to 3,108 in 2011 – an increase of 17.9 percent. This is the highest figure since the current system of calculating statistics was introduced in 2001.

The most frequently violent group were Germany’s left-wing extremists, who were responsible for a total of 1,809 political attacks, an increase of 472 or 31.4 percent.

This sharp rise in left-wing violence has confirmed the government’s fears that the drop in 2010 had been an exception to the increases which have been observed since 2005, according to the interior ministry.

The figures showed a rise in the number of xenophobic attacks of just under 23 percent in 2011 over the year before.

Interior Minister Hans-Peter Friedrich spoke of a “latent brutality” among the far right which explained why more people were injured in racist attacks than in any other kind.

Overall, the number of right-wing attacks remained steady, with a slight increase of 2.7 percent bringing the total number to 828 in 2011.

High figures were partly due to the discovery of the murderous neo-Nazi terrorist cell the National Socialist Underground, responsible for killing at least nine people from immigrant backgrounds and a German policewoman.