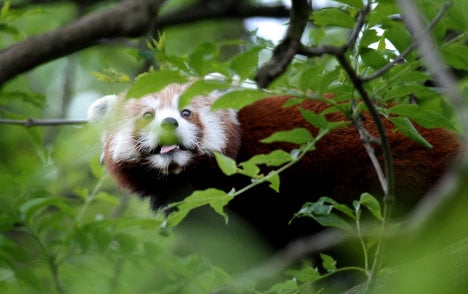 Manchu, a four-year-old red panda, was spotted by a zoo keeper on Thursday morning high up in the branches of a tree around 80 metres away from his enclosure.

“We called the fire brigade straight away,” zoo director Wolfgang Ludwig told The Local. “This is not the first time Manchu has had to be hosed out of a tree.”

He said Manchu had taken advantage of a dip in the power supply to the electric wires that usually keep him and his mate Lobke in their enclosure.

“He would not have thought of it as escaping, rather he would have taken a walk and then as it got light, found himself in a tree with people walking around underneath and vehicles and so on,” said Ludwig. “He would have found it very frightening,”

This is the fourth time Manchu has left his enclosure. But the last time was around 18 months ago, after which the electricity supply to the enclosure was altered and “we thought the problem was fixed,” Ludwig said.

He said the last three times the fire brigade had used a hose to spray water up into the tree and drive Manchu down to lower branches before he would drop into a sheet.

This time though, he climbed further upwards and eventually fell through the foliage, meaning no-one could see to catch him, leaving Manchu to thud to the ground.

“We kept him on his own for a night, but he is mobile and fairly aggressive, so although he was very scared and did not eat for a day, we do not think he was injured,” said Ludwig.

Red pandas, native to the Himalayas, are not pandas, but are related to raccoons and are generally active in the evenings and at night.

“We are going to have to take a careful look at the electricity supply,” said Ludwig.