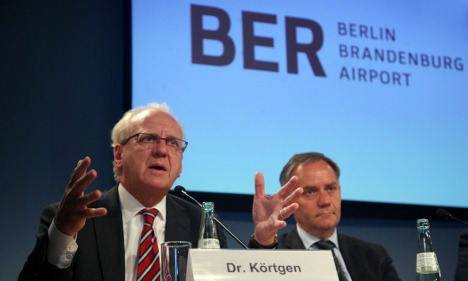 Manfred Körtgen, managing director of the still incomplete Berlin Brandenburg “Willy Brandt” Airport (BER), finished his doctorate in 2010 – two years after taking over as the head of one of Germany’s biggest-ever infrastructure projects.

His thesis was snappily titled, “Optimization ideas for the process-orientated completion of complex construction measures making use of new information and communication systems.”

According to a report in Friday’s Bild newspaper, the University of Kassel awarded Körtgen a grade of “very good” for his work.

But his academic prowess has not been matched by the practical application. The 59-year-old has been held largely responsible for a further delay announced on Tuesday, three weeks before the opening scheduled for June 3.

Körtgen’s multitasking feat has met with scorn from the German aviation industry. “It’s a mystery to me how you can combine a project as complex as the construction of the new airport with a doctorate,” one unnamed airport manager told the Tagesspiegel newspaper on Friday.

An anonymous colleague told Bild, “Sometimes he drops his pen at 2pm on a Friday, flies to his family in Krefeld and comes back on Monday.”

According to Körtgen’s thesis introduction, he began work on his doctorate in 2003, the year before he was employed as head of planning and construction for the new airport in 2004. In 2008 he was promoted to the top job of managing director.

Körtgen also acted as project director of the renovation of Düsseldorf Airport after a terminal fire in 1996, and wrote that his thesis was researched during “work on two complex infrastructure projects.”

Renewed delays to the airport, which was originally scheduled to open in 2007, are expected to last at least until the end of the summer and have been blamed on problems installing fire safety systems. The failure to open on time has become a logistical fiasco and PR disaster for Berlin.

Airlines have had to re-schedule thousands of flights back to Berlin’s existing airports Tegel and Schönefeld, which had been due to close down as BER opened.

Germany’s largest airline Lufthansa said that up to a million passengers could be affected by the scheduling change, depending on when BER finally opens.

According to the Berliner Kurier newspaper, the delay could cost the city up to €15 million a month, with many retailers and caterers considering legal action against the city for damages.

Mayor Klaus Wowereit has faced calls for his resignation from the opposition Green Party, and was forced to apologise to the Berlin state parliament on Friday.

Cautious of a further debacle, the mayor has not given a new date for the delayed opening, though according to the Berliner Kurier, airlines believe that October or November was “realistic.”