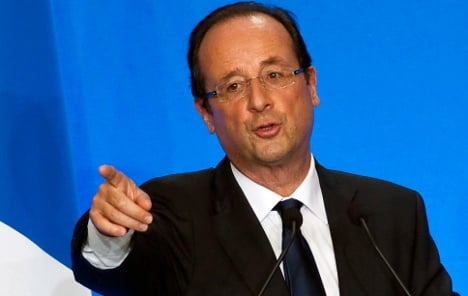 Hollande is to formally become president of France on Tuesday at 10:00am replacing Merkel’s defeated French ally Nicolas Sarkozy, and will name his prime minister before flying to Berlin, aides said.

“The formation of the government will probably take place late the next day,” the Socialist leader said late Thursday.

Several French official sources confirmed the planned talks with Merkel, which were to include a press conference and a working dinner.

The Socialist leader had previously promised that his first visit would be to the German capital, where Merkel has said he would be welcomed with “open arms”.

France and Germany – Europe’s biggest economies – have traditionally been seen as close allies and the motor of European unification.

But ties have come under strain during the debt crisis, with Sarkozy at first pushing for Germany to allow greater burden-sharing within the eurozone, before backing down and tacitly accepting Merkel’s leadership.

Hollande campaigned on a pledge to renegotiate the eurozone’s fiscal pact, which binds member states to austerity measures, and which Merkel argues is essential to underpin the continent’s eventual recovery.

Both the German and French leaders have made conciliatory noises since Hollande’s election on Sunday, but the meeting is expected to be tense, with Berlin already insisting the pact can not be re-opened.

But observers expect that some kind of compromise can be found, perhaps through a parallel treaty or annex to the pact that would include measures to favour growth alongside the previous deficit-cutting.

Even here, however, divisions would remain, with Hollande favouring joint EU investment in major projects, and Merkel calling for structural adjustments to – in particular – labour markets and pensions.

Meanwhile, Hollande’s former partner Segolene Royal said Thursday that their four children would not attend the swearing-in ceremony at the Elysee palace.

“Francois Hollande has been elected president, this is not about family, not about friends.

“They think they would not be in their place. There are intimate moments for the family and official moments where protocol must be respected,” she added.