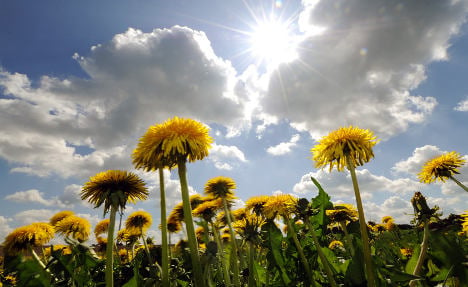 Temperatures could reach a tropical 30 degrees Celsius in the southwest on Thursday, with highs of above 20 widespread elsewhere. While the south and east should stay fair and dry, the north and west are forecast to be cloudy and if very unlucky, may see thunder and hail in the afternoon.

This bad spell could continue into Thursday night, but temperatures nationwide should range from 10 to 17 degrees.

Friday is set to be a day of contrasts for the Bundesrepublik. The northwest will face a chilly end to the week, with temperatures plunging back down between 13 and 17 degrees. The rest of the country could see temperatures as high as 31 degrees, though.

Nowhere escapes the threat of unsettled skies though on Friday. Sustained gusty showers will pummel the north and while the south and east may escape the worst of the weather in the morning, residents should brace themselves for heavy downpours and even hail later on.

Friday night will be rainy in the south east and in mountain areas, according to the DWD, but otherwise clear. Temperatures are expected to range from 4 degrees in the north to 10 in the south.

In general terms, the DWD envisages a cooler but more settled weekend. Saturday should start with a sudden temperature drop, with it looking unlikely that temperatures will top 15 degrees.

But, showers will be isolated with strong winds confined to coastal and mountain areas. A cool and clear night is forecast, with temperatures dropping to 2 degrees Celsius and a chance of frost and rain in the Alps.

Sunday should welcome the arrival of a high-pressure area in the northwest, hopefully guaranteeing a pleasant day for most. A day out for Mothers Day could certainly be on the cards, but the DWD suggests taking a coat just in case.

The end of the week also signals the start of the Eisheiligen, the succession of saints’ days from 11 to 15 May that supposedly bring colder weather but herald the imminent approach of summer. DWD has them at least partly living up to their name, with frost a strong possibility on Saturday and Sunday nights.