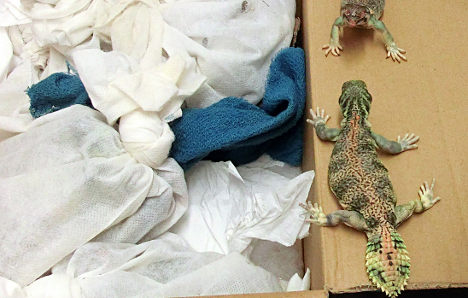 Officials making a routine check were startled to discover 49 reptiles – including 31 spiny-tailed lizards, as well as 18 geckos and other assorted lizards – in the man’s suitcase.

The customs office said on Wednesday that the man, on his way back to his Bavarian home after travelling in the Middle Eastern Sultanate of Oman, said, “I want to prepare them as food.”

“The traveller even offered to bite the head off one of the spiny-tailed lizards in front of officials as proof,” a customs spokesman said.

“Of course we stopped him doing that.”

But the officers also expressed scepticism about the 28-year-old man’s “dinner defence.”

“He was going to eat the lizard right there,” the spokesman told The Local. “But they are worth several hundred euros each on the black market, so he might have wanted to sell them.”

The smuggler is expected to face a fine of several thousand euros for transporting protected animals.

The lizards are now being cared for by vets at an undisclosed location in Munich. “They’re doing fine,” the official said.