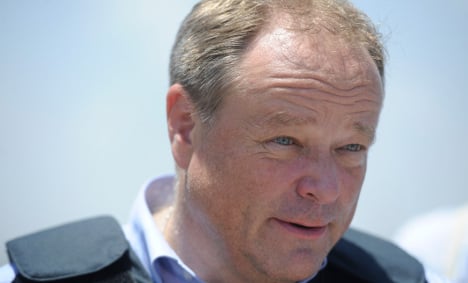 Dirk Niebel told Tuesday’s edition of Die Welt he wanted to send a “political message”, adding: “that is why I am skipping my planned visit to a game by the German national team in Ukraine.”

He said that Kiev had expressed a will to move closer to European values and standards and could now show “how seriously it takes these commitments,” according to a pre-released copy of the interview.

The announcement came during a visit to Berlin by the daughter of Ukraine’s jailed former Prime Minister Yulia Tymoshenko for meetings with German political officials in a bid to raise the issue of her mother’s plight.

Germany has been at the forefront of international criticism of Kiev’s treatment of Tymoshenko who was jailed for seven years in October on charges that European Union leaders view as politically motivated.

The 2004 Orange Revolution leader, who has complained of debilitating back pain since being jailed, also launched a hunger strike on April 20 over an alleged beating in prison.

“It is wrong to lock people up in prison because of political convictions,” Niebel, who is a member of the pro-business Free Democrats, a junior partner in the governing centre-right coalition, said.

German President Joachim Gauck has rejected an invitation to a May 11-12 Yalta summit meeting while German Chancellor Angela Merkel is reportedly considering ordering ministers not to attend matches.

She told a newspaper last week that she would decide whether to attend the Ukraine-held games at the last minute.

A Ukrainian daily newspaper close to the party of President Viktor Yanukovych Friday published an editorial accusing Germany of not changing since the Third Reich and still trying to dictate its rule.

Löw, who also announced his preliminary squad for the tournament on Monday, told reporters that a boycott of the European championships by any team was “clearly not sensible” but that the political situation in Ukraine was of concern.

Germany, which is among the favourites to win Euro 2012, will play all three of their opening games in Ukraine.