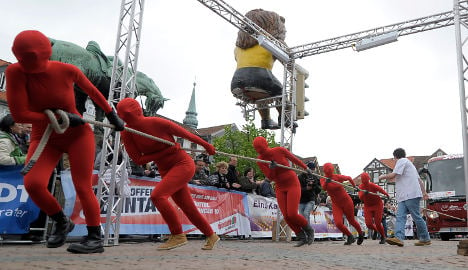 Bollingstedt is a small town near Flensburg in the northern state of Schleswig-Holstein, with just under 1,500 people who for reasons unknown, are particularly talented at pulling busses.

On Sunday 16 teams from around the country competed in the discipline, pulling 14-tonne buses.

Not only did the Bollingstedt women’s team “Snow White’s ten dwarves” take their title, ahead of only two other teams, the men’s team “Ten dwarves A” also beat the other 12 groups in their competition.

The most important factors in such a win are said to be good shoes and a loud group of fans.

The Bollingstedt teams will now have to watch out for the Cato Pulldozers from Wolfsbüttel, Lower Saxony – they have won five times and are bound to be keen to regain their crown.