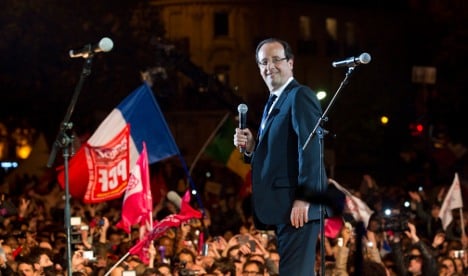 Merkel, who had publicly called for fellow conservative Nicolas Sarkozy to win the election, phoned Hollande to congratulate him, with both leaders stressing the importance of close Franco-German relations for Europe.

“The chancellor invited the French president-elect Hollande to come to Berlin as soon as possible after his inauguration,” Merkel’s spokesman Steffen Seibert said in a short statement following the phone call between the pair.

“Both agreed how important close Franco-German relations were and assured each other that they would strive for good and trusting cooperation,” Seibert added.

The statement gave no date for a possible meeting of the two, but Hollande’s inauguration is expected to be around May 15.

Hollande’s campaign manager Pierre Moscovici had said earlier that France’s new leader would take up the invitation “quickly after his inauguration”.

Speaking to reporters at the French embassy in Berlin, Westerwelle sought to allay fears that a change of power in Paris would put the brakes on the Franco-German motor that has driven Europe through the crisis.

“We will work together on a growth pact” for the embattled European economy, Westerwelle said – referring to a key campaign theme for Hollande that had irked Berlin, as it placed more emphasis on austerity as a way out of the crisis.

“I have no doubt that we will rise to our common challenges,” Westerwelle added.

He also said he looked forward to a “close partnership” between the two nations.

“I am confident the Franco-German friendship will be further deepened,” Westerwelle said, adding that Europe was at its most effective when its two strongest economies stood together.

The French campaign was dominated by a debate over whether austerity, demanded by Germany, or growth, pushed by Hollande, was the best tonic for the ailing eurozone.

Hollande won few friends in Berlin by criticising the chancellor’s insistence on austerity as the way out of the crisis.

Since then, both camps have sought to smooth ruffled feathers, with Merkel shifting her crisis-fighting rhetoric more towards growth and Hollande advisors stressing the importance of Franco-German friendship.

Hollande has always stressed that his first foreign visit would be to Germany.

Merkel formed such a close partnership with Sarkozy, especially at European level, that the pair was dubbed “Merkozy”.

But although Merkel would undoubtedly have preferred her conservative ally to win the election, many analysts believe that her understated style is more similar to that of her new French partner.

She has gone out of her way to stress that she would work well with whoever won the election and that Franco-German friendship transcends personality.