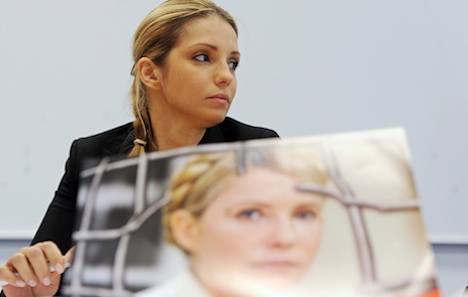 Yevgenia Tymoshenko is to meet with Merkel’s Christian Democrat group, which is holding a parliamentary session on human rights, the weekly Bild am Sonntag reported.

“The German chancellor has already met Yevgenia Tymoshenko in the past,”

government spokesman Steffen Seibert said, but added there were no plans for a

Yulia Tymoshenko’s family has voiced fears over her health, and the jailed former prime minister has extended a hunger strike.

Berlin has led international criticism of Kiev’s treatment of Tymoshenko and Ukraine could face a boycott by European leaders of the upcoming Euro 2012 football games being played there. The games are being co-hosted by Ukraine and Poland.

Tymoshenko on Friday agreed to be treated in a Ukrainian hospital, a German

doctor said after visiting her in prison.

“Tymoshenko has given her preliminary agreement to be moved on Tuesday,” said Berlin’s Charite clinic head Karl Max Einhäupl, adding that Ukraine had accepted her condition that she be treated at the clinic by a visiting German doctor.

The 2004 Orange Revolution leader launched a hunger strike after allegedly being beaten by prison wardens who tried moving her for treatment to a state hospital against her will on April 20.

She has complained of debilitating back pain since being jailed for seven years in October on charges that European Union leaders view as politically motivated.

But she has also expressed fears of being purposefully infected by Ukrainian doctors, following the contamination in hospital of a fellow jailed cabinet member. She has sought treatment in a German clinic she trusts.

“I do not find my views of democratic fundamental rights, human rights, personal freedom or freedom of the press to be found in the present political situation in Ukraine,” Lahm told the German news magazine Der Spiegel.

And Hungarian president-elect Janos Ader became the latest leader from an eastern or central European country to skip a summit in Ukraine opening in Yalta on Friday, amid concerns over Tymoshenko.