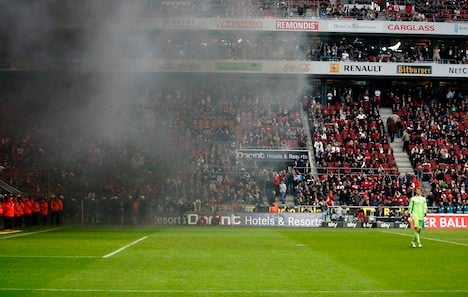 In Berlin, Hertha were able to win a spot in the relegation play-off with a 3-1 victory over 1899 Hoffenheim. They will now play the team that finishes third in the second Bundesliga for a place in the top flight.

“We fought like lions,” said Hertha coach Otto Rehhagel, who signed with the team in February. Rehhagel came out of retirement to help the ailing Hertha, which was where he began his Bundesliga playing career in 1963.

“I have often said, that the fans here in Berlin have earned the spot in the Bundesliga,” he said.

But Cologne struggled against Champions League finalists Bayern for most of the game.

As the end of the game approached, fans lit several smoke bombs, forcing officials to call the game after 89:30 minutes, prompting police to run onto the field, and the players to run off to the locker rooms.

Cologne coach Frank Schaefer said, “It is a black day for everyone.”

Munich star Mario Gomez said on Sky TV after the game, “What happened in the stadium is a disgrace. Something like that doesn’t belong in a football stadium… These are not fans, they are idiots, who are using the stage of the football game.”

Cologne’s Lukas Podolski, who recently signed for English club Arsenal for €12 million, said after the game: “This is one of the bitterest defeats for me – I have to stomach it.”