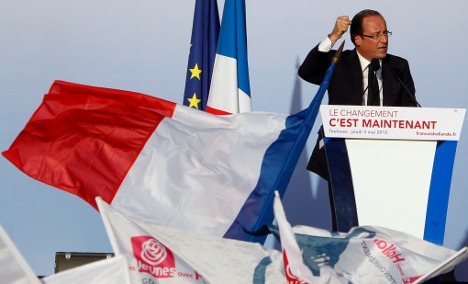 But he has been buoyed by a turning tide in Europe, as voters baulk at biting fiscal consolidation.

Although she needs France, along with all other participating countries, to ratify the fiscal pact, Merkel has drawn a line in the sand, saying watering down austerity pledges would rattle markets and undermine long-term confidence.

Meanwhile Hollande, who polls say will defeat President Nicolas Sarkozy, argues international investors are crying out for a strong message on growth.

After the chancellor forged such a close working relationship with Sarkozy, they took on the shared nickname “Merkozy”, partners would be watching nervously to see whether she could build similar ties with Hollande.

Well-placed sources in Berlin said the best Sarkozy’s potential successor could expect would be a few growth initiatives but without any new major public spending commitments.

Merkel has taken pains in recent days to stress her commitment to fostering economic growth as well as fiscal discipline to tackle the debt crisis, paying her respects to the traditional Franco-German motor of EU integration.

Ulrike Guerot, director of the Berlin office of the European Council on Foreign Relations, said Merkel recognised she could not afford to box herself into a corner with neighbours who are facing a bitter anti-austerity backlash.

“Merkel has sent clear signals that she does not want to end up isolated” in Europe, Guerot told AFP.

Similarly, Hollande would be ill-advised to stage a frontal assault against Merkel.

“He will need skill and not mount direct opposition because both of them need to save face in the end,” she said.

Striking a bargain may not be as hard as it looks, said Chantal Mairesse of the Foundation Genshagen, a European policy think-tank, noting that aides to Merkel and Hollande had already begun laying the groundwork behind the scenes.

“The idea to add a component on growth (to the pact) is the result of a much broader debate in Europe,” she said. “But it is a clear sign that Germany, France and Europe are desperate to stay united and constructive.”

“It will all depend on how Francois Hollande handles this,” noted Stefan Seidendorf, a European policy analyst at the German-French Institute in the southwestern city of Ludwigsburg.

“There are some fundamentals that have to be respected but between those fundamentals is some real room to manoeuvre if there is a smart approach to the negotiations.”

Claire Demesmay, an expert on bilateral relations at the German Council on Foreign Relations, said such negotiations were part of the usual give-and-take between Berlin and Paris.

She noted that both the French and German governments were aware they would need to get on the same page as soon as possible but that Berlin wanted to “avoid the impression of diktat”.

If he wins, Hollande – and Merkel – know they need to hit the ground running after the election “because they will be under close watch not just from European partners but also from the markets”.