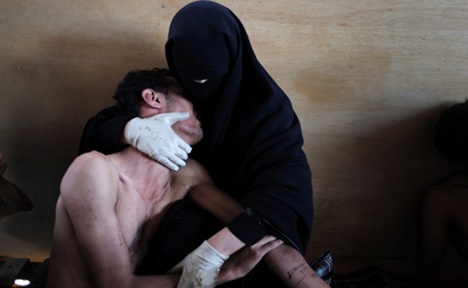 The exhibition includes the World Press Photo 2012 of the Year, by Spanish photographer Samuel Aranda, who captured a heartbreaking moment in a Yemen mosque, as a woman in a black burqa held her wounded son in her arms.

A panel of experts selected the photo out of more than 100,000 submissions from 5,200 photographers. Winners in other categories such as “daily life” and “spot news” were also picked and will also displayed at the Hamburg exhibition.

Photojournalists have been competing for World Press Photo honours since the awards were founded in 1955. It is now widely recognised as one of the world’s most prestigious press photography competitions.

Previous winners include British photographer Tim Hetherington, who died in 2011 while covering the Libyan civil war.

This year, the winning photos include a photo of a rhino whose horn was cut off by poachers, child brides in India and several shots of civil unrest in the Middle East.

A total of 57 photos from 25 different countries will be displayed at the Gruner + Jahr Pressehaus.