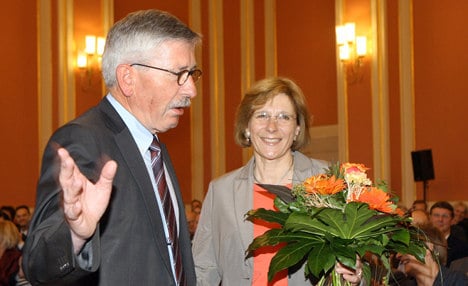 Ursula Sarrazin, whose husband Thilo wrote “Germany Abolishes Itself”, has penned what is likely to be another controversial book: “Witch Hunt – My Time as a Teacher in Berlin” (“Hexenjagd – Mein Schuldienst in Berlin”).

The 60-year-old wife of Berlin’s former state finance minister and best selling author, has written a book which describes her as a victim of bullying, according to the Berliner Zeitung in an article published Tuesday.

Sarrazin says she was bullied by many parents after she started teaching at the Reinhold-Otto-Elementary School in Berlin’s West End neighbourhood. She had previously taught at a number of different schools.

But the paper said parents accused Sarrazin of “personally defaming” their children and of screaming at them. A number of parents complained about her, but the most complaints came from parents with a Turkish background, the paper wrote.

Students were called “poor victims” or “parasites” parents said. Parents at many other schools where Sarrazin taught also complained about her, the paper wrote.

Her husband’s book derided immigrants for being a drag on German society and costing the country too much money.

Mrs. Sarrazin has rejected all criticisms and filed a complaint against the director of the Reinhold-Otto-School and also one against Berlin’s education administration, for reportedly taking too long to deal with the complaints.

The paper wrote that she has taken a leave of absence and will be eligible for a reduced pension when she turns 63. But the cut in pension pay shouldn’t affect the Sarrazins much, as her husband Thilo has a nice financial cushion from his best selling controversial book, the paper wrote.