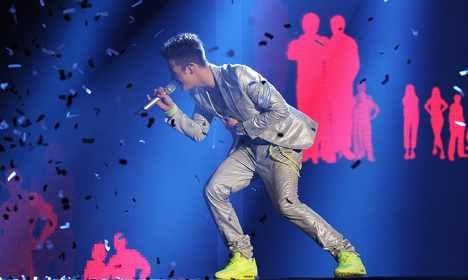 Hänni is also the youngest winner of the show, after he beat 16-year-old Daniele Negroni from Regensburg. The Swiss teen was seen as an early favorite because of his consistently good performances.

Hänni interrupted his masonry training to participate in the show, which is broadcast on RTL. He won 52.8 percent of the vote in “Superstar’s” ninth season and won a record contract with Universal Music and €500,000.

Both Hänni and Negroni will also receive driving lessons and a car from the show’s sponsors.

Hänni’s first single – “Don’t Think About Me” – can already be downloaded from the internet and is coming to stores next week. The Swiss teen was selected over more than 35,000 Superstar-wannabes.

On average some five million viewers watched this year’s “Superstar” season, a decline from last year.