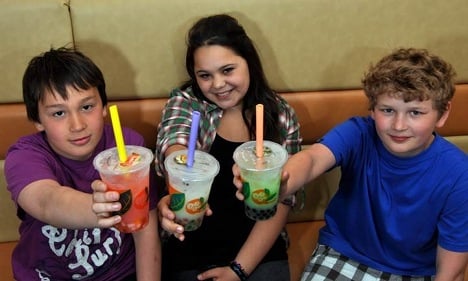 The shops serving the sweet tea combinations, which include gelatin-like balls of tapioca and come in a variety of flavours, are opening in downtown areas, the paper reported. The tapioca balls split open in your mouth, spurting out sweet mango or orange syrup.

The drinks, served with oversized straws, sell for about €3,50, the paper wrote. The beverage is particlarly popular among teens and pre-teens, who wait in long lines outside bubble tea stands. The paper described the drink as a “very strange phenomenon” and called the bubble tea shops the “Starbucks for those who are not yet coffee drinkers.”

But dieters beware: an average service contains about 550 calories and the Techniker Krankenkasse public insurer has called the drink fattening. Doctors have also warned that small children might choke on the bubbles.

Anyone in Germany can sell the drink under the bubble tea name, as it is not patented. The drink was reportedly created 30 years ago in Taiwan as a children’s beverage and was then exported.

It came to Germany after three friends – two Chinese and one Taiwanese – started the first Bubble Tea Bar in Berlin in 2009. Today those three head Boboq, one of the largest bubble tea chains in the country.

Boboq now has 70 bars across Germany and another 150 are expected to open before the end of the year. “Every few days we open another bar,” the company’s spokesperson said. The company’s goal is to become as big as Starbucks, he said.

It’s unclear how many litres of bubble tea Germans drink, but the paper reported that coffee – with 150 litres consumed per person annually – remains the top beverage in Germany.