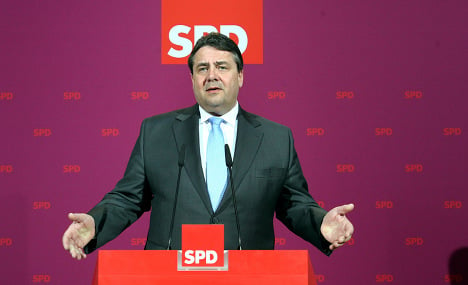 Gabriel told the Bild am Sonntag Sunday paper that “politicians must be careful that they don’t become cheerleaders for the regime. They will probably be sitting in the stadium next to prison directors and members of the secret police. When in doubt, you should not go there.”

The paper, published Sunday, released the interview Saturday and excerpts were published in the Die Welt daily.

Gabriel’s comments come after four explosions within an hour on Friday rocked the eastern Ukranian city of Dnipropetrovsk, the county’s third largest city, injuring at least 27 people, nine of them children.

That prompted the German Foreign Ministry to strengthen its warning to those traveling to the Ukraine, saying travellers should be “especially careful and closely follow the news.”

Gabriel praised German President Joachim Gauck for cancelling his planned visit to the Ukraine following reports of Tymoshenko’s mistreatment. The former prime minister is in jail serving a seven-year sentence for abuse of office and is awaiting trial on tax evasion charges. Her treatment has been widely condemned as politically motivated.

Tymoshenko has gone on a hunger strike for allegedly being beaten and taken to a state hospital against her will.

On Friday leading physicians from Berlin’s Charité hospital offered to treat Tymoschenko in Germany for back problems, saying it would be impossible for her to receive adequate treatment in Ukraine. They say she is suffering from a herniated disc, which has become chronic.

“I would appeal to the Ukrainian president – be a humanitarian president dedicated to values and allow her to go abroad to Europe for treatment,” said Karl Max Einhäupl, the head of the Charité team of doctors seeking to treat her. So far the Ukraine has denied requests for Tymoshenko to be treated abroad.

Charité physicians have examined Tymoshenko in the Ukraine. She has fought incessantly with her wardens since first being put under arrest in August and has previously refused to let any Ukrainian doctors touch her as a form of protest.