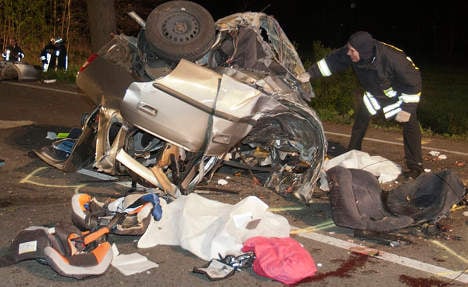 The car, an old Opel, was ripped into three pieces when it smashed into a tree around 300 metres away from the road. At least two of the three passengers died instantly, local newspaper Stimberg Zeitung reported on Friday.

The group were travelling from the North Rhine-Westphalian town of Recklinghausen in the direction of Datteln when, at around 8:30 pm the accident occurred. |Why the 30-year-old driver lost control of the vehicle remains unclear, police told the paper.

No other vehicles were involve, but the road has been shut off so investigators examine the mangled pieces of the car and the debris can be removed.

According to Stimberg Zeitung a helicopter used to search the surrounding areas to check that more bodies had not been flung further away.

Police are yet to confirm the identities of the victims, but told Bild daily newspaper that “they died at the scene of the accident” and that “the car is completely destroyed.”