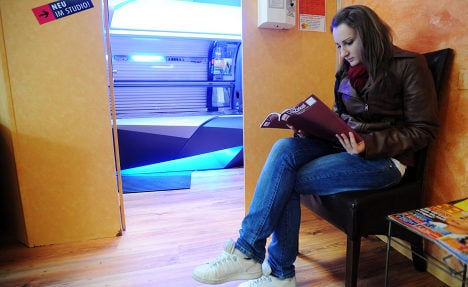 The chance of developing a malignant melanoma doubles if a person uses sun-beds regularly up to the age of 35, said Professor Eckhard Breitbart, chairman of the Working Group on Dermatological Prevention (ADP).

He said each year of sun-bed use increased the risk of developing the very dangerous form of skin cancer by three percent, and that risk increase was irreversible.

Experts gathered in Berlin this week for an international workshop on the health risks of sun-bed use. French and Italian scientists presented the collective results of nine international sun-bed studies.

The overriding conclusion for the 4.8 million German sun-bed users, was that regularly frequenting a tanning salon – between once and twice a month for a number of years – considerably increases the risk of getting skin cancer.

Malignant melanoma is the most deadly form of skin cancer. The often dark-coloured skin growths contain cancerous cells that can spread into the lymphatic system. In 2008 alone, the Robert Koch Institute calculated that 17,800 new cases of malignant melanoma were diagnosed in Germany, and 2,500 people died as a result of the disease.

A recent study funded by German Cancer Aid found that 3.5 million under-36s identified themselves as regular tanners. Around 167,000 of them were believed to be under-age and using the salons illegally.

Women between the ages of 18 -25 were found to be the group who used tanning beds the most.

A number of research groups believe that there is no scientific proof behind the argument that UV sun-beds have therapeutic benefits. “Visiting a tanning salon has no positive effect on a person’s health. It does not increase vitamin-D production nor does it strengthen the immune system,” said Professor Sven Schneider, who was involved in the study.

There are around 50,000 sun beds in Germany. A normal model pumps out UV rays that are as strong as the midday sun at the equator and many are thought to be stronger.