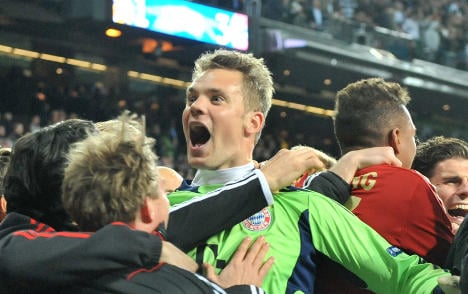 Neuer saved penalties by two of the world’s most expensive players – Cristiano Ronaldo and Kaká – to beat the Spanish giants 3-1 on penalties in the Bernabéu stadium. This books the Bavarians a place in the final on May 19 – where they will enjoy home advantage over English veterans Chelsea.

Madrid’s goalie Iker Casillas matched the German’s feat, saving tame efforts by Philipp Lahm and Toni Kroos, but a row-Z effort by Spanish defender Sergio Ramos which sailed over the goal, and a confident finish by Bastian Schweinsteiger, sealed the deal for the Bavarians.

See the best pictures from a mad night in Madrid and Munich!

Crowds erupted onto the streets of Munich as Schweini’s penalty rattled into the back of the net at around 11:20pm. Police were forced to block off central thoroughfare Leopoldstrasse to traffic, as thousands of football fans celebrated long into the night.

It is the first time in the history of the Champions League that one of the finalists will be playing in their home stadium. Although this makes Bayern favourites in Munich’s Allianz Arena, they will have three key players missing through suspension – David Alaba, Luiz Gustavo, and Holger Badstuber.

Like Barcelona the night before, Real Madrid comprehensively overturned a first-leg deficit early in the second leg.

Having lost 2-1 in Munich thanks to a dramatic 90th minute winner by Mario Gomez, Madrid came out firing on all cylinders in the opening exchanges, out-passing Munich in midfield and pushing them back into their own half.

Then in the fifth minute, Bayern’s Austrian left-back David Alaba gave away an unlucky penalty, slipping and blocking a shot with his arm. In contrast to his later effort in the penalty shoot-out, Ronaldo tucked the spot-kick away confidently to give Madrid the early initiative.

Eight minutes later, the Bayern defence inexplicably left the Portuguese striker alone in front of goal, and Ronaldo scored his tenth goal of the campaign with a neat low shot past Neuer. At that point, with Bayern’s defence flailing and Real rampant after barely 15 minutes, few would have bet on the Bavarians to recover.

But, like Real, Bayern’s strength is the speed and efficiency of their passing going forward. Alaba, one of Bayern’s key performers on the night, had already produced an exhilarating run down the left in the eighth minute, only for Arjen Robben to waste his excellent cross, chipping the ball over the bar from close range when it looked easier to score.

But on 26 minutes, Toni Kroos, barrelling down the inside right channel, pulled a sweet, indefensible pass into the path of Gomez, who was brought down in the area by scrambling defender Pepe. It was Robben who struck the penalty into the bottom left, just about putting enough on the ball to get past Casillas’ outstretched hand.

That strike left the tie balanced on 3-3, with both sides boasting an away goal. Even though both teams looked defensively frail in that frenetic opening half-hour, the final 90 minutes of the game passed goalless, leaving the tie to be decided in the most dramatic way possible.