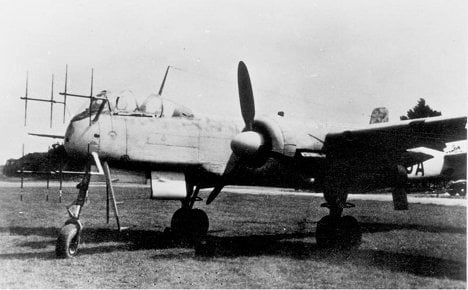 The wreckage of the Heinkel He-219 night fighter, badly corroded by seawater, was recovered on Monday from Tannis Bay, on the Jutland peninsula, where it was lying at a depth of just three metres. Experts at the Danish Aalborg military museum are now examining it.

Just 268 of the aircraft were built, due to air raids on the Heinkel factory hindering production and internal squabbling in the Nazi government. The only survivor apart from the Danish example is in the US National Air and Space Museum.

The heavily-armed, radar-equipped He-219 was one of the most sophisticated aircraft of its time, featuring ejector seats and a pressurised cockpit, aviation historian Ib Loedsen said.

Soon after its introduction in April 1943, it was credited with shooting down 25 British bombers in some 10 days, including six of the redoubtable de Havilland Mosquitoes.

Parts of the plane were found off Denmark a year ago after a fierce storm disturbed the bomber’s watery resting place. An Aalborg museum curator said it was planned to put it on show later this year.