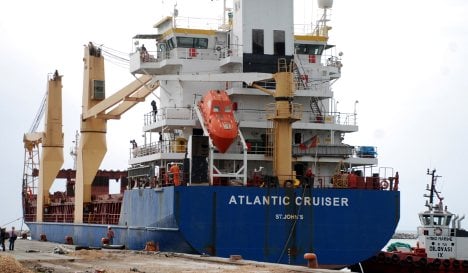 “As a result of the investigation, nothing was encountered which can be described as weapons, munitions or military materials inside any of the checked goods,” according to the official report which was signed by Turkish customs officials and released on Wednesday.

The Antigua and Barbuda flagged Atlantic Cruiser, which belongs to a German company Bockstiegel, docked at Iskenderun port last Wednesday after suspicions that it was carrying Iranian weapons on board destined for the Syrian government.

Turkish authorities conducted a thorough search of its cargo.

“During the performed tally; the types, numbers and the quantities of Syria cargo were found in full compliance with the figures pointed out within the relevant cargo documents,” they said in the report.

After the search, the checked cargo was loaded back on board, the report said, adding there had been no damage to the goods during the investigation.

The German shipping firm had denied allegations that its vessel was carrying Iranian arms to Syria which would have flouted EU sanctions against the Damascus regime.

The government of Syrian President Bashar al-Assad is under Western sanctions due to the deadly crackdown on dissent which erupted in March last year.

Turkey, a former ally of Damascus, has also slapped some sanctions on its neighbour – including interception of Syria-bound arms shipments by air, land and sea.