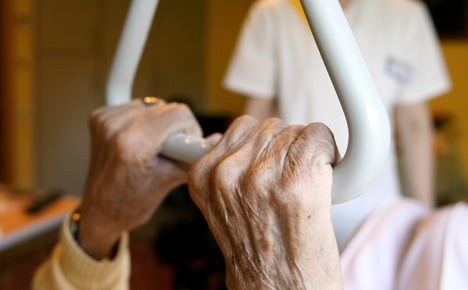 Across the country around 140,000 people are being routinely restrained in old age care homes – and in around a tenth of these cases the required court order has not been issued, according to a report from the advisory body that for state health insurance (MDK).

Care of pressure sores and other wounds was also found to be wanting, with around 134,000 people at increased risk of bed sores not receiving enough preventative care.

And despite improvements in care over the past five years, 97,000 people in care homes who have difficulty eating or swallowing do not get enough help, the report said.

The MDK urged for improvements as it presented its study.

Between 20 to 40 percent of patients in more than 8,000 care homes were found not have received adequate wound care, enough food and drink or close enough observation for signs of dementia. Around 61 percent of residents also received some sort of sedative on a regular basis.

“There is still a lot that needs to be done,” said Gernot Kiefer, head of the board for statutory health insurance on Tuesday.

The first systematic inspection of the nation’s care homes was ordered in 2007 after years of complaints, and since then a report has been compiled every year.

For the 31 percent of residents who were registered as suffering chronic pain, a large proportion of homes had failed to establish a consistent pain management plan.

In many cases, the inspectors were pleased with the results, though. “Quality of care has broadly improved,” said head of the MDK Peter Pick. “But in certain areas there is an acute need for action.”

The results come as German politicians are waking up to the idea that in the next 50 years, the number of its population suffering from dementia will double, reaching around 2.5 million.

Currently, 61 percent of the 700,000 people who live in Germany’s care homes suffer from some form of dementia.

Around half of these residents were found to have received too little care and just one in three patients received dementia-specific treatment.

“There has to be a high level of professional knowledge to look after people with dementia,” care expert for the MDK Jürgen Brüggemann said. “Sufferers often can’t explain how much pain they are in, so you have to figure it out from movements.”

Insurance boss Kiefer has been pushing for parliament to fund the care of dementia suffers and if a drafted reform from the Health Ministry is passed, more money could be available by 2013.

Nearly 8,000 of the 1.7 million outpatients were also assessed by the MDK, who found that only two fifths of those who were at risk of bedsores were receiving adequate care. Generally, the standard of at-home care for people with dementia had declined since 2007.